The winners of the innovation prize, which has been announced for the eighth time by the ZENIT e.V. network, have been announced: NRW Minister of Economic Affairs, Prof. dr. Andreas Pinkwart, patron of the competition in Mülheim an der Ruhr, honored the winner and five other companies. Twenty-two projects with highly interesting competition entries had applied for the innovation prize.

Under the motto “Success through Cooperation”, innovative product and service ideas were sought that were developed in cooperation of a medium-sized company with a university or research institution or between companies. The quality of the submissions was exceptionally high, which is why six projects have been awarded. The laudatory speech in front of more than 100 guests was presented by jury chairman Prof. dr. Oliver Koch from the University of Applied Sciences Ruhr West.

Among the award-winning companies is the GED Gesellschaft für Elektronik und Design mbh, which had applied for the coveted award with EQUIVert. 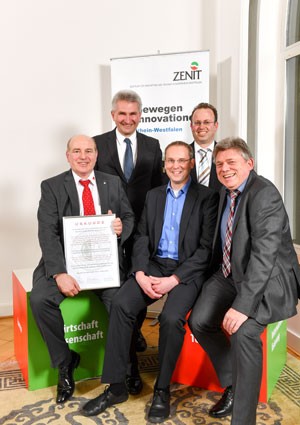 All award-winning companies can look forward to a one-year free membership in the Zenit e.V. network. The ZENIT e.V. network has been supporting small and medium-sized technology-oriented companies and universities in their innovation and internationalization activities since 1984 on behalf of the EU and the federal government. Its bringing together potential partners from business and science.

The competition theme “Innovation through Cooperation” had been chosen to highlight the great potential that can be developed through the cooperation of economic and scientific stakeholders or companies. The “transfer of knowledge and innovation between universities and companies will become more and more a success factor for economic development in Germany in the future” emphasized Prof. Koch in his eulogy.